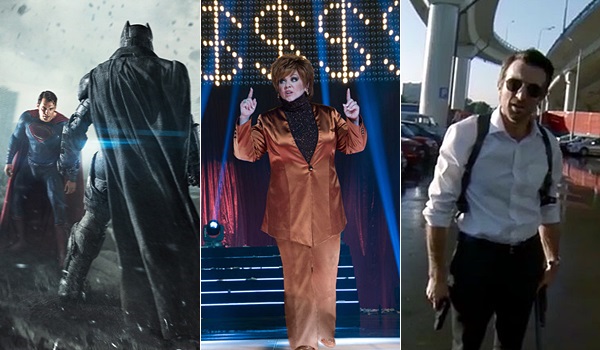 While it should continue to fall off sharply, Warner's Batman v Superman: Dawn of Justice looks like it will be able to outpace Universal's The Boss to hold onto first place this weekend. 2013's Man of Steel declined 50 percent in its third weekend, while last year's Furious 7 was down 51 percent. BoxOffice feels that Batman v Superman will experience a third weekend percentage decline slightly more than both of those films.

The Boss is expected to be the weekend's strongest new release, but at the same time isn't expected to reach the same opening weekend heights as Melissa McCarthy's previous box office hits. Also opening in wide release this weekend is STX Entertainment's Hardcore Henry, which we see opening in fourth place (behind Disney's Zootopia).  Meanwhile, opening in moderate release this weekend is Fox Searchlight's Demolition, starring Jake Gyllenhaal and Naomi Watts.

- There is plenty of room for The Boss in the marketplace this weekend, especially with how quickly Batman v Superman has fallen off thus far.

- While early reviews for The Boss are very poor (the film currently has a Tomatometer of just 10 percent on Rotten Tomatoes), McCarthy has proven to be critic proof in the past (with both Identity Thief and Tammy).

- The Boss has been performing softly on Twitter, though the film's generic title is having a negative impact on the film's tweet levels.

- In general, the film's premise doesn't feel as audience friendly as those of McCarthy's recent hits.

- Online reaction to the film's trailer has been very positive and the film's first-person perspective should help it appeal strongly with gamers.

- Early critical reviews for Hardcore Henry have been good, as the film currently boasts a 77 percent Tomatometer on Rotten Tomatoes.

- As is the case with The Boss, there is plenty of room for Hardcore Henry in the marketplace this weekend.

- Twitter activity for Hardcore Henry has been modest, especially for a film aimed at a niche audience. The film also hasn't picked up much on Twitter as it nears release, which could be a sign of the film not expanding beyond its target audience.

- The film's first-person perspective could come across as gimmicky, especially outside of the video game and film buff communities.

- This could be a case where initial online excitement over a trailer doesn't ultimately transfer into a break-out performance at the box office.

BoxOffice projects this weekend's top ten films will total $93.2 million. That would represent a 24.5 percent decline from the $123.4 million top ten total of the same weekend last year. That frame was led by the $59.6 million second weekend take of Universal's Furious 7, saw Fox's Home take second with $18.5 million in its third weekend and Fox's The Longest Ride debut in third with a modest $13.0 million.

Check out our complete forecast in the table below.